Posted on November 10, 2012 by literaryworkshop

I had never considered trying my hand at luthiery, but recently one of my students, Will, asked off-hand how hard it would be to build an Anglo-Saxon lyre.  After looking over a few websites, I concluded that, actually, it wouldn’t be all that hard.  So we dug through my lumber stash and came up with enough wood to build the instrument.  Will played the apprentice well, and after three sessions, we had a playable instrument.

But first, some background.  The Anglo-Saxon lyre is an archaic instrument.  We don’t actually know a lot definitively about how they were built, but between a few excavated fragments, a couple medieval illustrations, and one or two explanations in early medieval texts, we can get a general idea about how they were constructed and played. 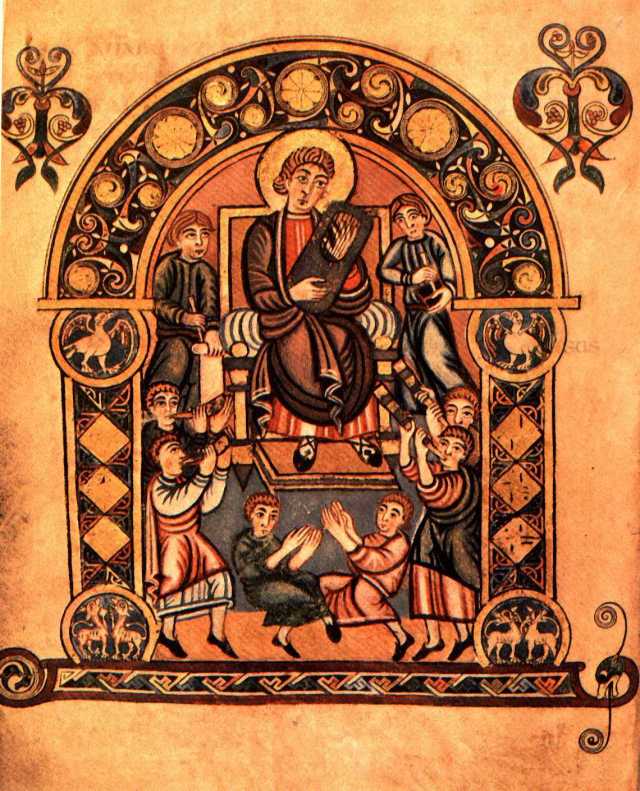 The above illustration from a medieval psalter shows the kind of lyre we had in mind.  It is a six-stringed instrument that consists of a sound box and an open back so as to allow the player to mute various strings with his off-hand.  Dimensions vary considerably between the few extant examples, but they range in height from 20″ to 30″ and in width from 6″ to 8″.  Thickness is something of a mystery, but the sound box on at least one seems to have been only 1″ deep, making for a relatively long, thin instrument.  Other details, such as the presence or absence of holes in the sound board, remain unclear. Morrisson and Sharptooth’s website is an excellent source, though some of the links are out of date.

Because I was building this as a prototype, I selected materials and construction methods based on what I had at hand.  It appears that the body of a lyre would have been cut out of a solid piece of hardwood.  The sound box would have been excavated, probably with gouges, and then covered with a thin piece of wood.  In the interests of economy, I decided to build a simple frame from white pine, mortise-and-tenoned together at the corners, with a middle brace for the top of the sound box.  Overall, the instrument is 32″ tall and 8 1/2″ wide, and the whole thing is about 1 1/2″ thick.

The owner trying out the lyre after stringing.

We then overlaid the frame with 1/8″ birch plywood.  The top, which receives the tuning pegs, is made of walnut.  The strings are nylon guitar strings.  We glued the curved blocks into the opening to give it a bit more shape–you can probably tell that they’re offcuts from the top.

The bridge is made from walnut and is about 3/4″ tall and 2″ wide.  The strings are attached to a walnut plate, which is itself strung to a 1/2″ oak peg that sticks out of the bottom.  The pegs are made from pecan, a very tough wood that will hold up to the stress of strings.

Building this instrument was very simple, requiring only some basic joinery tools (dovetail saw and assorted chisels), a couple hand planes, a drill, and some shaping tools (coping saw, spokeshave, half-round files, and card scrapers).  Except for a bit of rough work with a band saw, this was an all-hand-tool project.

The big challenge was the tuning pegs.  How to make match the tapered pegs to tapered holes?  I don’t have a lathe, and even if I did, that only takes care of the pegs.  I dug around in my tool box and found myself an old T-handled pipe reamer, which I could use to taper the holes in the frame.  Then I could make pegs to match.

Well, what’s a new woodworking project without a new tool?  I found a block of 2″X 2″ hardwood, drilled a hole through it the size of the small end of the tapered hole, and then reamed the hole out with the reamer.  I made two saw cuts intersecting the tapered hole, and installed a spare block plane iron (bevel up) with a large screw and washer.

The result is a “witchet.” (The tool has many other names.)  It is used by inserting a dowel or roughly-tapered peg into the hole and turning like a pencil sharpener until the peg is tapered.  I think it’s easiest to fix the peg in a vise and turn the witchet.  The iron should be set to take a pretty fine shaving.  Adjust the cutting depth with gentle hammer taps.  It takes some time to taper all six pegs, but the result is a perfect fit.

In order to tighten the pegs, I made a simple wrench out of pecan. (You can see it in the above picture, at the top near the block plane.)  It is mortised all the way through, and the arched handles allow them to clear the other pegs as it turns.

We finished the whole thing (except the pegs and holes) with a hand-rubbed oil/wax blend.  The pegs remained unfinished in the interests of friction.

This project was a wonderful change from the furniture, boxes, and tools I’ve been making recently.  The joinery was very straightforward, and there were plenty of little challenges to keep me interested.  I looked at several tutorials online before starting this project, and I found most of them overly-complicated because they relied too heavily on power tools.  The original lyres would, of course, have been made entirely with hand tools, and I think that’s still the way to go.  In retrospect, I shouldn’t have even bothered with the band saw.

Will is an experienced guitar player, so it didn’t take him long to figure out how to play it.

We finished the lyre less than a week ago, and just yesterday he treated me and some other students to a short demonstration.  It sounds wonderful.

As for me, I might just have to build myself one or two more, perhaps with some more authentic construction details next time.  I would also like to experiment with a sound hole in the top, as well as some more shapely pegs.

8 Responses to Building an Anglo-Saxon Lyre