Posted on April 29, 2020 by literaryworkshop

I really like my Morakniv sloyd knives, which I use for spoon carving.  They take a very good edge, they are reasonably priced, and they are still made in Sweden by people who know what good tool steel is.

Recently I’ve been making wooden sheaths for all of them.

Because if there’s one thing I’ve hated about these knives, it’s the chintzy, generic plastic sheaths that come with them. 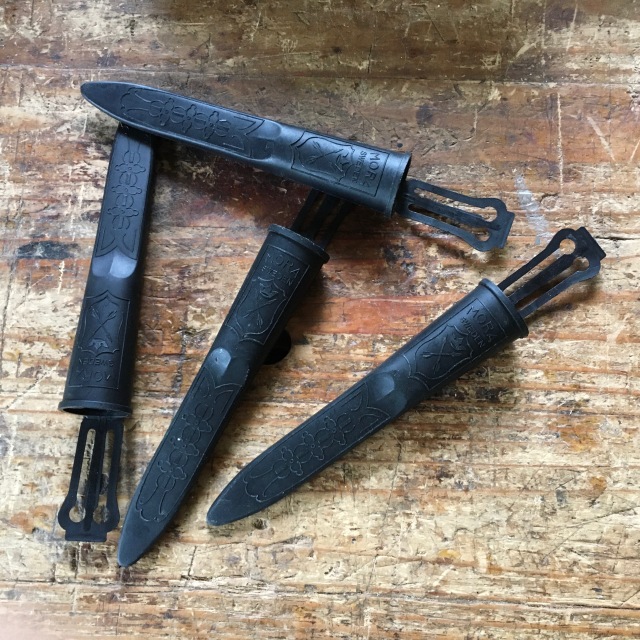 The knives all come in exactly the same sheath, regardless of blade length, so the shorter knives are constantly falling out of them.

Many craftsmen make sheaths for their knives out of fine leather or even out of birch bark.  But I’m not leather worker, and birch bark isn’t exactly common down here on the Alabama Gulf Coast, so I’ve kept the sheath project on the back burner.  Finally I saw a simple method on Instagram for solid wooden sheaths that protect the blades and keep the knives from falling out.  (I’d give credit for the design if I could remember where I learned it–suffice to say, none of the following is original to me.)

Here’s the gist of the method, and then I’ll give the details below: cut a block of wood in half, route out a blade-shaped recess in one of the halves, leaving the mouth tight.  Glue the two halves together again.  Open up the mouth if necessary with a knife or a file until you get a proper friction-fit.  Shape the outside of the new sheath to your heart’s content.

This is one of the sheaths I made–indeed, the last one I made, once I got the bugs worked out of the process.  It’s made of a scrap of dry walnut wood.  The others in the first pic above are made from cypress scraps.  Cypress worked okay, but the wood is softer, and I managed to ruin a couple of sheaths during the process.  So I recommend a good hardwood like walnut, maple, cherry, poplar, or just about anything you have lying around (but not oak, which has tanins that will cause ruse).  Pine will do fine if you’re careful. It really helps if the wood is straight grained and completely free of knots.  It must be totally dry, or it may shrink and trap your knife blade inside it.

Exact dimensions don’t matter much.  You need a piece of wood that’s about 5/8″-3/4″ thick and about 3/4″ wider than the blade of your knife.  Length doesn’t matter, so long as it’s a little longer than the knife blade.

First, resaw the wood and plane down the matching pieces so they mate with each other.  I kept track of grain orientation, just to ensure the sheath looks like a single piece of wood at the end.  Then trace the blade of your knife onto one half with a pencil.  You will route out this profile just to the depth of the knife blade’s thickness, except for the very end of the opening.

Use a carving knife to cut all around the penciled lines.  If you remove the pencil lines entirely, the knife blade will have plenty of space to fit.

I used two methods to excavate the waste.  I used a chisel (bevel down) to do most of the work.  Then I used a small router plane to make sure everything was cut out even.  On some of the sheaths I made, I used a marking gauge to first mark the final depth across the mouth and then excavated everything with the chisel alone.  Either method works fine.

As I said above, you want the sheath to be tight right up at the opening.  The rest of it can (and should) fit the blade quite loosely.  So leave the mouth of the sheath thick right up at the last 1/4″ or so.  You want a tight fit at the mouth, which can easily be eased with a small carving knife or a file after the two pieces are glued back together.  But it’s much harder to fix a too-tight fit further down.

Now glue the two halves together.  Be careful with clamping pressure, as a clamp can collapse the space you’ve so carefully excavated–as I learned from experience.

Once the glue is dry, you need to reduce the outside dimensions.  I laid the knife on top of the sheath, and then drew the outline of the blade but stayed about 3/16″ away from the blade on all sides. I cut the profile out with my bow saw. 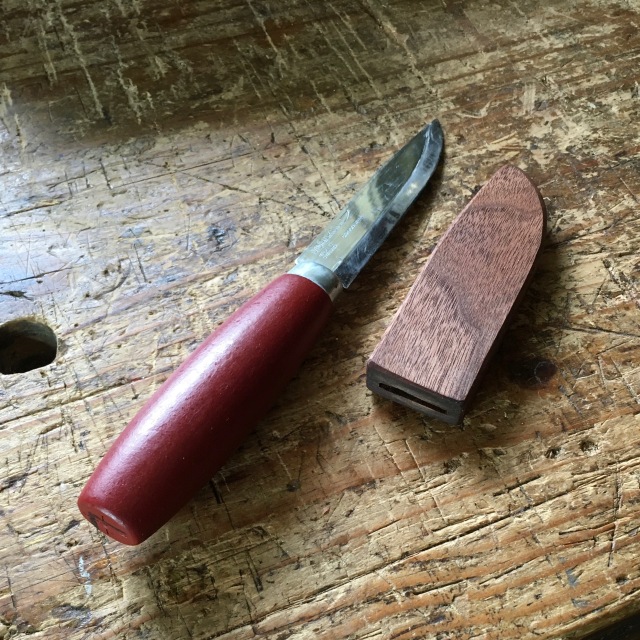 After smoothing everything out with a spokeshave and easing all the sharp corners, I dipped the sheath in Danish oil and set it aside to dry. 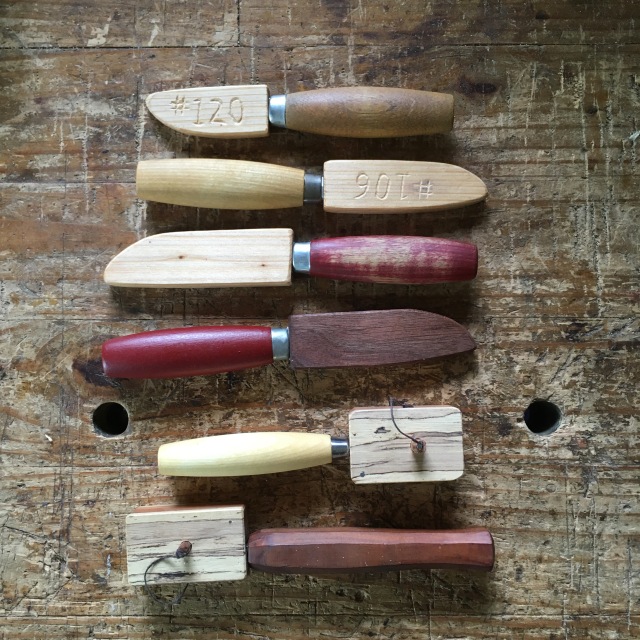 On some of the sheaths, I have carved the Morakniv model number because people are always asking for recommendations for knives, and I can never remember the model numbers.

While I was at it, I also made a case for my Mora 164 hook knife.  Because of the shape of a hook knife’s blade, making a wooden sheath for it is a little more involved, but it also provides an opportunity to play with color contrasts in wood.  I’ll show how I made the hook knife cases in a future post.