Posted on August 7, 2016 by literaryworkshop

Each stage of building this table has had its unique challenges.  First it was cutting usable lumber out of some pretty seriously damaged boards.  Then it was surfacing everything by hand.  Now, after the final glue-up, I was faced with the prospect of smooth-planing a panel that was significantly wider and longer than my workbench. I decided that I would set aside my Western, workbench-centric methods and embrace an Eastern approach to the problem. 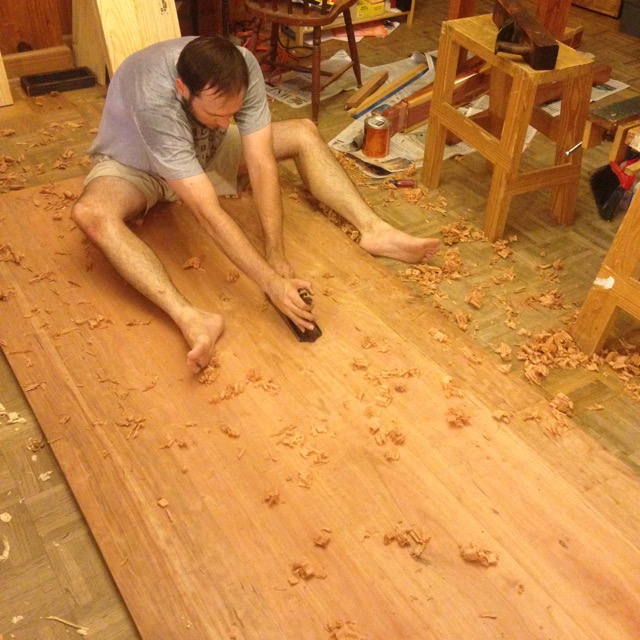 I’ve seen videos of traditional Japanese woodworkers, who work sitting on the floor, often holding workpieces with their feet.  In imitation, I sat on the panel to hold it down.  I worked barefoot, as Japanese woodworkers do, so as not to mar the surface with my shoes.  (Otherwise I NEVER work wood barefoot, but at this height it would be pretty hard to drop anything heavy or sharp on my foot.)  After trying unsuccessfully to push my smoothing plane across the panel, I turned it around and pulled it.  Asian hand planes are typically pulled, not pushed, and now I know why.  Pulling a plane is much easier than pushing it when sitting.  I found my smoothing plane was actually pretty easy to pull, and even comfortable to hold backwards–one hand on the knob and the other hand wrapped around the tote.  And no, pulling a plane like this is not as dangerous to certain body parts as it looks.

With the panel smooth, it it was time to flip it back over (with help!) and attach the top. 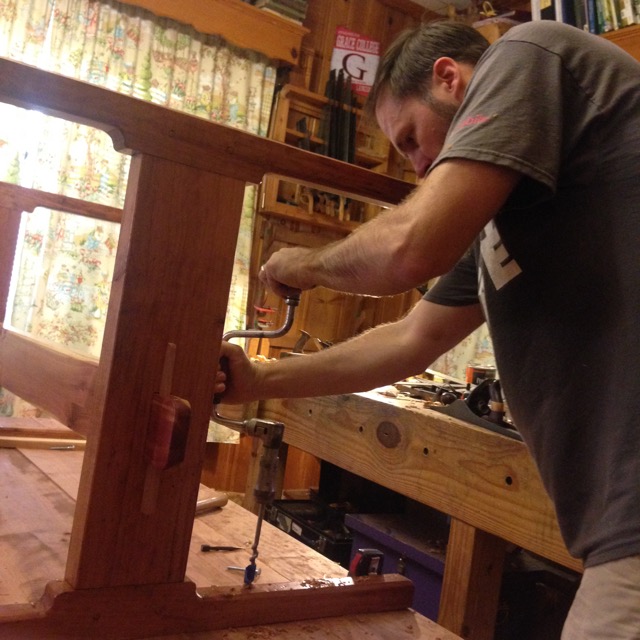 I nailed battens alongside the base, just to help keep the the base in alignment and to steady the base a bit.  The base is attached to the top with lag screws in generously oversize holes, to allow for the significant seasonal movement that this top will see.  A ratcheting brace made it easy to bore a hole next to the upright. 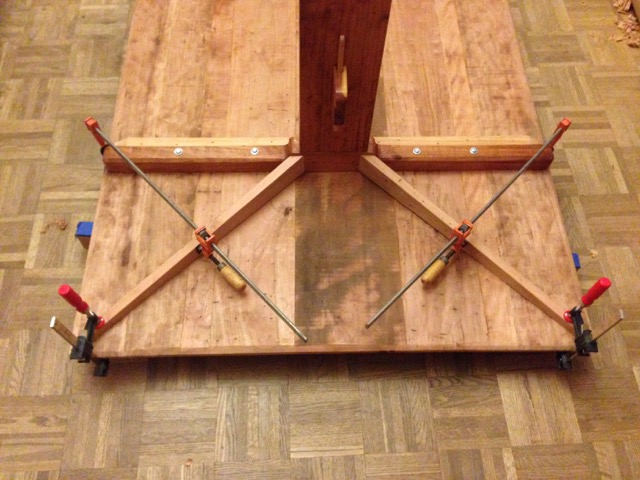 I also screwed some diagonal battens to the ends to reinforce the overhanging ends.

Note that the supports go nearly to each edge.  The feet of the table are just as wide, and the result is a very stable base.  In use, the kids haven’t even come close to upsetting the table, and they won’t.

The final stage before finishing was dealing with the flaws in the top.  This was, as I have said, “rustic” lumber, with various voids and knots, and a lot bug holes.  Where most would see these as flaws, I now see these as potential decorative features.  The idea is to fill in the voids with crushed stone in order to speckle the surface with contrasting color–a simple form of inlay.  I learned this technique from a turner, who uses it to fill checks and other voids in the wooden bowls he makes.

Some of the voids are deep, so the first step is to back-fill the deeper voids with other materials. 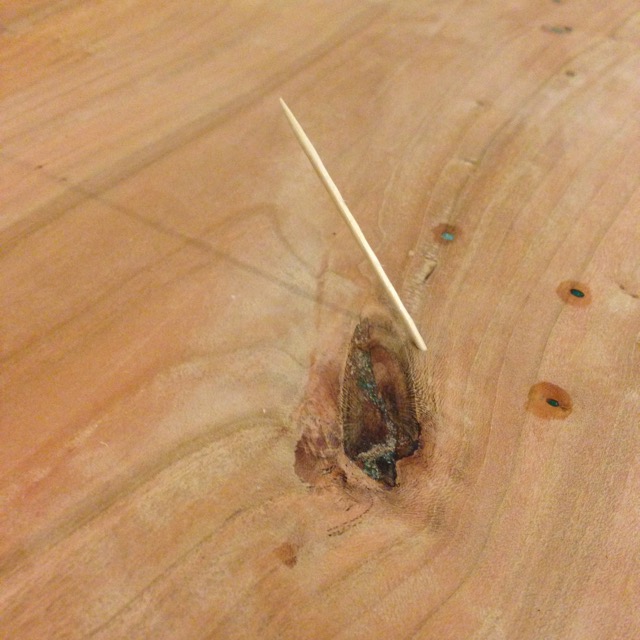 Bug holes could often be filled with toothpicks.  Some of the holes were shallow, but a few went all the way through the board.  In any case, I cut off the toothpick so it settled just below the surface of the wood.  Other, wider holes were filled in with sawdust topped with superglue.  That provided a stable substrate for the stone.  I could have just filled the holes with just the crushed stone, but that stuff is expensive ($10 for a few ounces) and sawdust is free. 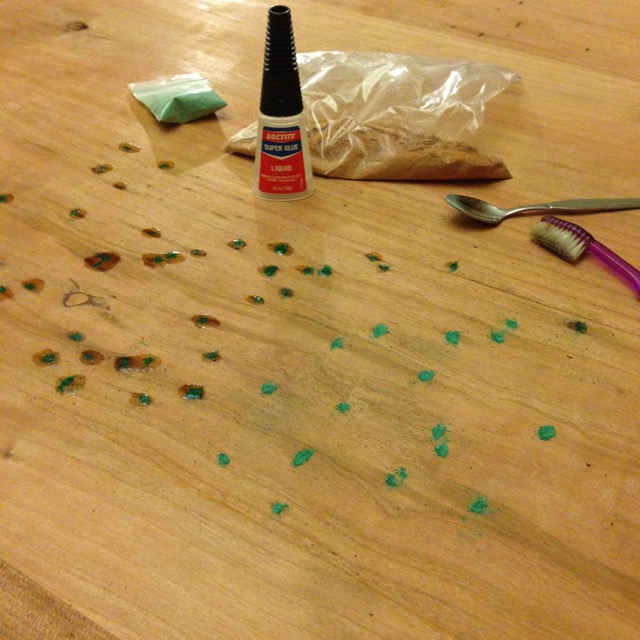 I topped off each void with the crushed stone.  It’s pretty fine-grained, but not quite a powder.  It’s about the consistency of table salt.  (The stone is sold in several consistencies–but for this application, the finer the better.)  A baby spoon and a toothbrush are handy for directing the stone into the hole.   You can’t just fill the holes in level, or it will sink down into the hole once you add the superglue.  I mounded up the stone slightly over each void, and then saturated each pile with a few drops of superglue–the regular liquid kind, not the gel kind.  The immediate result looks pretty awful. 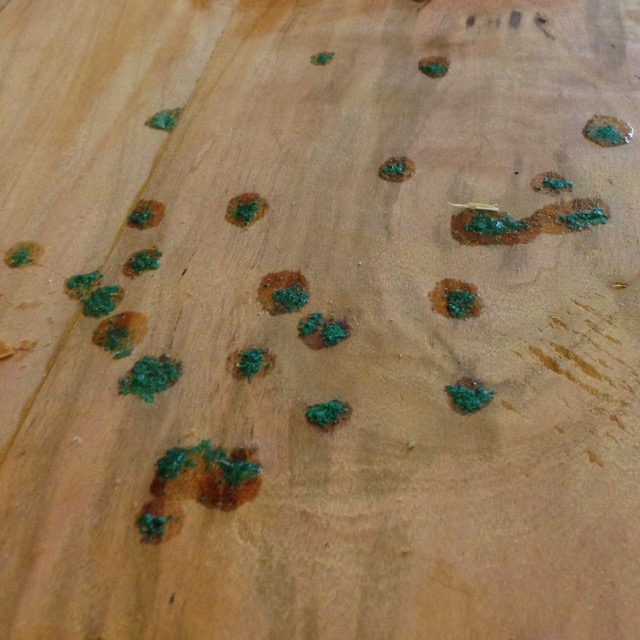 The process is the same for small holes (like bug holes) and larger voids, like knots. It even works with holes made by accidentally drilling a pilot hole for a screw too deep and coming up through the top by mistake.  Hypothetically, of course…

The superglue will dry in an hour or two, depending on the size of the void.  Once it has hardened up, it’s time to cut it down to the level of the surrounding wood. 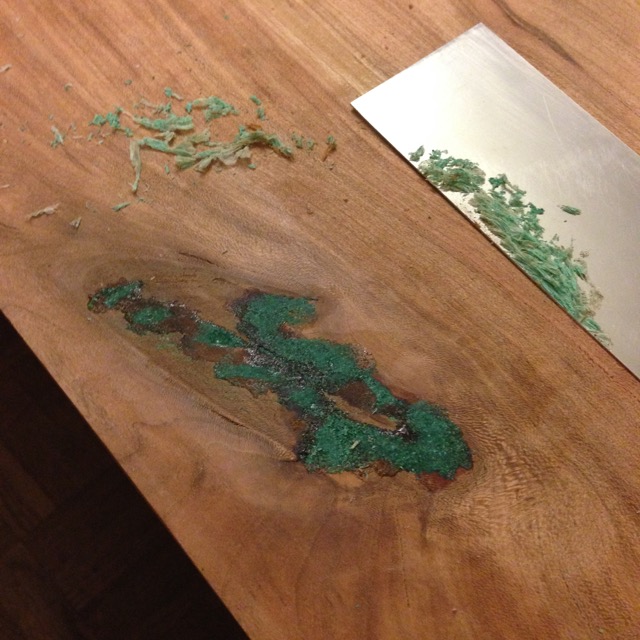 I used a card scraper to level the surface.  The scraper was a lot faster than sandpaper, but it was still a lot of work.  But the superglue-impregnated stone actually scraped quite well.  I was afraid it would dull the scrapers prematurely, but it didn’t.  A thick, stiff scraper worked better than a thin one.

After scraping, I lightly sanded the whole tabletop and applied a few coats of semi-gloss polyurethane.  The malachite-filled voids came out pretty well. 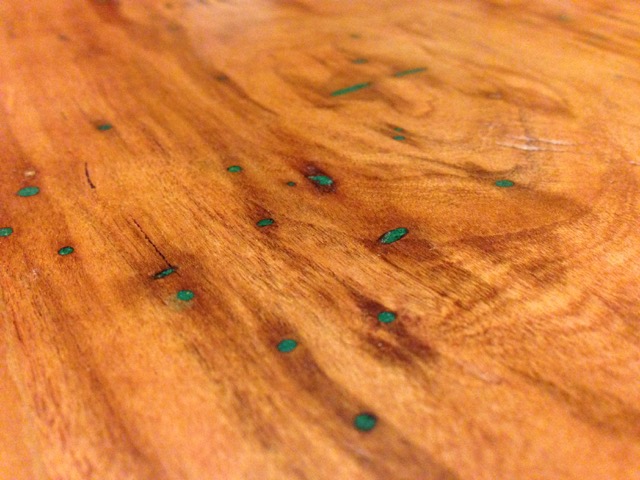 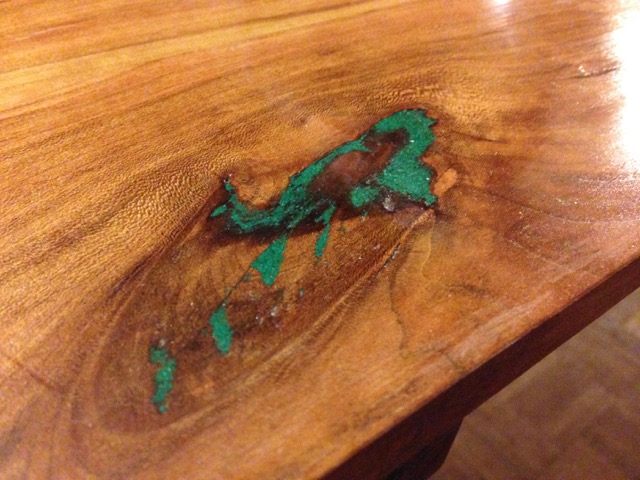 This is definitely a design feature that I will use again.  I am no longer afraid of lumber with bug holes, small knots, and other voids.  There are other color options, too, besides the green malachite: pink coral, white stone, and even aluminum filings (which I’ve used successfully before).  Crushed stone of many kinds can be bought in small amounts on Amazon.  With some patience and a few tools, it’s an easy technique to master.

And finally the table is done. 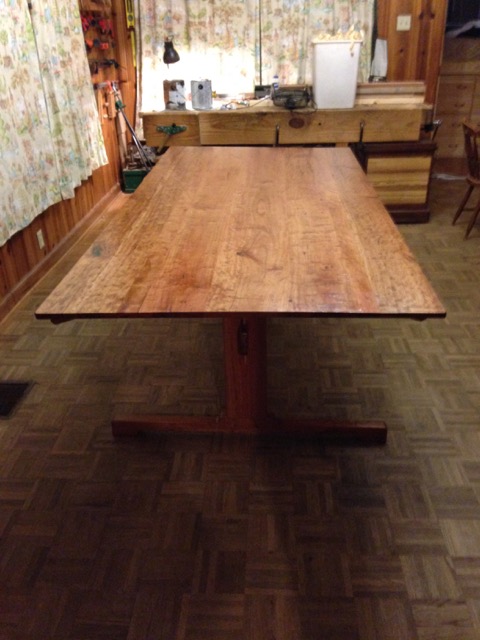 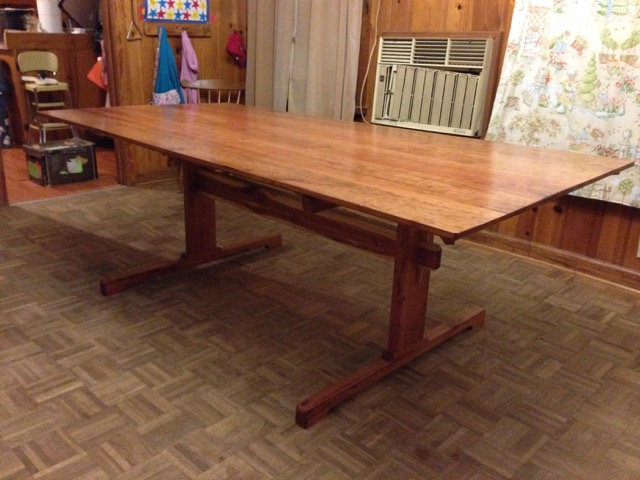 Now it’s time to pull up some chairs and gather around for family meals.