Posted on September 6, 2013 by literaryworkshop

Why do some tobacco pipes look smooth and graceful while others look clunky and clumsy?

I had been looking at classic pipe shapes, especially in old Dunhill catalogs I’d found online. I began wondering why some designs stood out, and the more I looked at them, the more I suspected that they were designed around the same kinds of whole-number ratios that are common in furniture design.

I printed out a few of the most attractive pipes–at least, the ones most attractive to my eye–and started to work on the images with a pair of dividers and a ruler. I found I was right.

But what about a bent pipe? 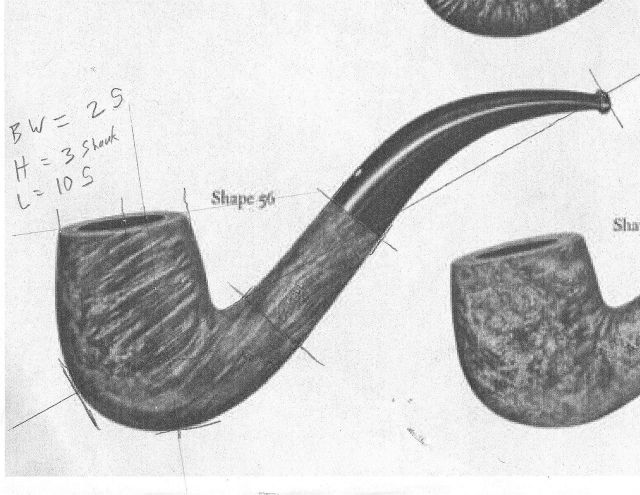 To begin with, the bowl shape is a standard billiard, so the bowl is three times as tall as the shank is thick and twice as wide at the top. The overall length is ten times the shank thickness.

I replicated the image and inverted it underneath the original image.  As you can see, the bent in the stem mirrors the curve under the bowl exactly.  And that’s why Dunhill pipes are beautiful to behold (and to hold).

Let’s look at one more shape, in which the ratios are a little more complicated.

This is an apple, one of my favorite standard shapes. The ratios look simple, but the design is pretty sophisticated. The bowl at its widest is as wide as it is high.  It fits perfectly inside a square.  The whole pipe is about seven times longer than the shank at its thickest. But there’s one more thing, which I don’t have drawn in. The bowl and shank both taper down, and the tapers are related. The top of the bowl is twice as wide as the shank is thick where it meets the stem. So there are two sets of ratios operating, not just one.

Other pipe shapes have still more complicated ratios, but calculating them requires only simple arithmetic.  These ratios are, I expect, well known to experienced pipe makers, but this was a revelation to me.  It explains with the simplest math (math that even I can understand!) why some pipe shapes look better than others, and it gives me some basic principles for designing my own pipes.